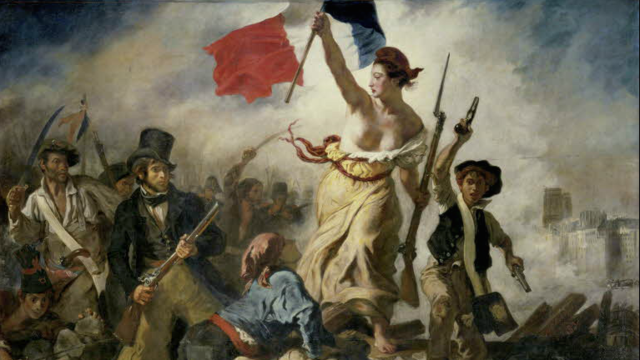 Detail from Liberty Leading the People by Eugene Delacroix, 1831, Louvre Museum, Paris
Writers and Artists of All KindsNeed to Make a Difference
Our country is a mess, and our planet’s not far behind.

Two-thirds of our citizens consistently believe America is heading down the wrong track. Over half disapprove of the policies and behavior of our current president, and think both major parties are out of touch with the concerns of the average person. There is still no broad agreement about the existence of climate change or the reasons why it might be occurring. Religious intolerance is approaching the level of the Middle Ages. Economic inequality is widening. The list could go on and on.

As writers, painters, musicians, playwrights, or artists of any kind, we can complain and continue doing the same kind of work we've always done, or we can try to use our talents to produce real societal change. And history demonstrates that the arts can make a difference.

In literature, a year after Upton Sinclair published The Jungle in 1906, replete with horrifying descriptions of the inhuman and unsanitary conditions in the Chicago meatpacking industry, Congress passed the Federal Meat Inspection Act, one of the first real governmental efforts to curb the rapacious business practices that were endangering the health and well-being of every citizen. Harriet Beecher Stowe’s 1852 novel, Uncle Tom’s Cabin, produced such a large public outcry against slavery that Ohio congressman Joshua Giddings declared on the floor of the House, “A lady with her pen has done more for the cause of freedom, during the last year, than any savant, statesman, or politician of our land.”

In the visual arts, Picasso’s monumental painting “Guernica,” a protest of the 1937 bombing of the Basque town by Hitler’s air force, traveled around the world to raise money for the anti-Franco, republican side in the Spanish civil war. In theatre, Bertolt Brecht’s 1939 drama, Mother Courage, written in response to Germany’s invasion of Poland, became the most influential anti-war play of all time. In music, no anti-Vietnam war protest of the 1960s was complete without John Lennon’s “Give Peace a Chance” or Pete Seeger’s “Bring ‘em Home.” And to this day, the emotional climax of every civil rights rally is the anthem, “We Shall Overcome.”

“Art for art’s sake” was a reaction to the prudery, hypocrisy, and conventional tastes of bourgeois society. "Arts for action's sake" is the necessary response to the issues and problems now facing our country and our planet. With my social protest novels and with arts4actionsake.com, I can put my talent and energy to work to help make a difference. Fellow authors, or artists of any kind, or readers or supporters of the arts, I urge you to join me to do the same.
Our mission must be to give all the arts a louder and saner voice in the public square.

Art for Art vs. Art for Action

"Art for art's sake" was a bohemian rallying cry in nineteenth-century, European literary and artistic circles, expressing the philosophy that “true art” has no other purpose than its own “being,” not didactic, not utilitarian, not moral, not religious, and not political. The phrase itself is seldom heard today, but the underlying principle is firmly embedded in practice. Rare is the novel, play, painting, film, or any other creative work, that attempts to convey a societal "message."

"Arts for action’s sake” harks back to an older tradition of artistic expression, when works of art of all kinds were created not only to entertain, engage, and illuminate human character, but also to communicate information or stimulate emotions that would lead to positive change in society, or strengthen socially valuable behavior or beliefs. This tradition can be traced from Homer and Virgil to Giotto and the Sistine Chapel to Shakespeare’s history plays to Fidelio to Les Misérables and Uncle Tom's Cabin and The Grapes of Wrath and 1984, with countless, treasured creative works in between. In other words, art with a purpose.