Boon Juster
or
The Reason for Everything 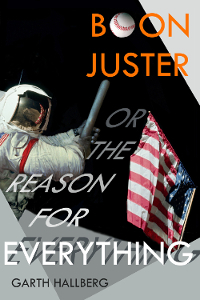 This darkly comic and irreverent novel—featuring aging prep-school buddies, sexy broads, loony billionaires, cutthroat realtors, a Georgetown-based “consultant” who looks after the final delusions of “astronuts,” a politically incorrect family of fakers and fixers, and even a cameo appearance by Babe Ruth—will leave you wondering if the Apollo program was where America started to go off track. Was it just one big photo op?

Once-successful, now laid-off ad guy Tom Hammock is entangled in a Manhattan realtor’s job he hates, beleaguered romantically by his hard-charging boss, Cerise, beset by his not-quite–ex-wife, Kate, a crusading TV journalist for “Second America,” and demoralized by the daily dystopia in Washington and the country’s six years in the economic meat grinder.

Still, Tom has everything under control until he is confronted by the sudden death of Boon Juster— his long-estranged high school hero, baseball team mentor, and romantic rival, as well as the fourteenth and last man to walk on the moon. Without any explanation, Boon has named Tom his executor, leaving him a trail of ambiguous clues about his state of mind and the reality of his feats as an astronaut, the most famous of which was smuggling a baseball aboard the Apollo 18 lunar lander and swatting the juiciest hanging curveball in the universe.

Tom’s chaotic, four-day odyssey to discover the truth ends in a tumultuous and ironic all-American finale full of surprises about love, death, and our country’s “exceptionalism”—and facing down the tyranny of youthful dreams.

"Hallberg's novel features a rich cast of characters that seem mined right out of a Carl Hiaasen novel, with situations so mordantly comic that they might have been freshly rejected from a Tom Robbins story...the pacing is fast, the characters are likable, and the mystery is just delicious enough to keep you turning the page."

"Compelling, plot-driven novel [that] uses NASA photos and documents, as well as...the cover photo, to drive the book's mysterious events...The story sticks in the reader's mind, raising questions about what they really know about historical events, and if they can trust what they hear in the future."