The Lit Biz Eats Its Best and Brightest 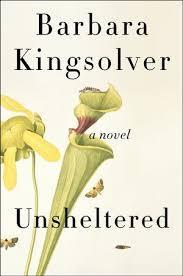 The American novelist, Barbara Kingsolver, writes stories that encourage readers to think while they’re being entertained. Her novels are concerned with the great social issues of our time, such as global climate change and political turmoil.

Publishers have a variety of names for this genre, as though the lit biz can’t quite get a grip on it—social novel, social justice novel, social protest novel, political novel, the literature of social engagement. Whatever these kind of novels are called, they’re generally viewed with suspicion by critics and editors, who see little or no place for social commentary in “literature” or in sales. Happily, that attitude hasn’t stopped Kingsolver’s books from becoming best sellers, and being shortlisted for such prestigious honors as the Pulitzer Prize and the PEN/Faulkner Award.

Kingsolver’s eighth novel, Unsheltered, was published in October. It’s more overtly political than her previous novels, as well is should be in this Time of Trump. It’s also one of the most entertaining and thought-provoking novels I’ve read in quite some time.

The plot revolves around an educated middle-class couple,  Read More