Something Lighter for a Change! 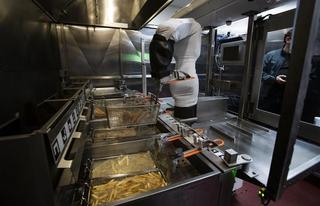 "Flippy" at the fry station!

Every once in a while, I think I'm entitled to pat myself on the back. Way back in 2017 I published a novel that highlighted the danger to the jobs of low-wage workers posed by the coming Artificial Intelligence revolution—The Piketty Problem, or The Robots Are Coming, The Robots Are Coming. I chose fast food as the example of an industry that was poised to go robotic, and McDonald's as the company to lead it.

The novel got great (paid) professional and reader reviews but mediocre sales—no "discovery" is the downside of self-publishing. It also produced a few raised eyebrows. Who was going to believe that the beloved American hamburger was going to the robots?

Fast-forward to 2020, and Miso Robotics, the start-up that developed "Flippy" and inspired my thinking, is ready to emerge as a real competitor to low-wage workers. By selling its robots on a subscription basis, $2,000 a month, it can bring the "wage" down to about $3 an hour. Who's going to beat that? And considering that Flippy doesn't call in sick or complain about being splattered with hot oil, the choice should become a no-brainer.

McDonald's hasn't yet bought in, but they're actively engaged in bringing AI into their outlets, initially through ordering terminals. Nor has any other major chain—yet. Fast food is an industry that sells friendly service, so there's a real PR problem with putting robots in the kitchen, even if they don't interface with customers. And there's a real human problem, with putting a lot of underappreciated and underpaid workers out of work. (I explored both issues in The Piketty Problem.) But it's going to happen sooner rather than later, because it's not only friendly service that sells, but low-cost burgers.

Only Andrew Yang raised the issue of AI in any meaningful way during the Democratic primary campaign, and it got overshadowed in the media by his proposal to give every American a Universal Basic Income of $1,000 a month. What the media forgot to add is the reason for his proposal—to offset the inevitable job losses from automation. The solution may be radical, but the problem is getting more real every year, so who's looking to the future—you, Bernie and Joe?

Oops, sorry, I promised to keep this light!