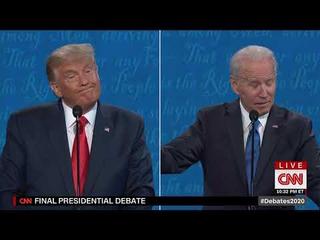 The moment in last week's presidential debate when Joe Biden vowed to transition to renewable energy over time "because the oil industry pollutes significantly," Trump's face lit up with surprise and delight.

"It is a big statement," Biden shot back.

As Democrats held their heads in their hands, Trump and his fellow traveler Republicans pounced on another Biden "gaffe." This was even better ammo than the outright lie they'd been peddling that Biden would end fracking.

Biden's handlers lost no time hustling him into the spin room so that he could explain that he was talking about ending federal subsidies to the oil industry and that fossil fuels would not be eliminated until 2050.

But were Biden's word a gaffe or a hard truth that needed telling? Despite the politically prudent need to walk back his statements, and unlike about-to-be Supremo Amy Coney Barrett, Joe Biden was willing to declare in another follow-up interview that climate change is "the number one issue facing humanity" and that "unchecked, it is actually going to bake this planet."

My fingers are crossed that this incident will allow Biden to pick up more votes from the younger, climate-concerned generations than he'll lose from shortsighted voters in oil-producing states. But even if Trump hammers him for the rest of the week before the election, I hope Biden will stand up and defend his statements. Because if we don't hear this hard truth louder and more often, and from more politicians, we're going to have to face the consequences.

If that were to happen, the not-quite-saving grace is our divisiveness will have come to a natural end. We'll all be in the same place—in the oven.