To the Planet: You're Fired! 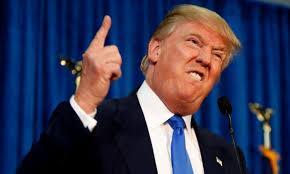 Is there any doubt that the president is intent on imposing maximum damage on the country while he's still clinging to office? Aside from undermining the faith of the citizenry in free and fair elections, he's channeling his Apprentice persona and unleashing his inner-Nixon on his "enemies list."

If you've been following the news, you know that the president fired four top D.O.D. officials this week, including Mark Esper, the Defense Secretary, terminated by tweet. Four loyal and seemingly underqualified replacements now are in control of important offices in the Pentagon. At the same time, Trump named another loyalist as general counsel at the National Security Agency.

There are numerous rumbles about what the president is up to, and why anyone would accept a position in an administration that has a shelf life of only two months. Most of the speculation has centered on an end game of withdrawing troops from Afghanistan or initiating hostilities against Iran, wag-the-dog style.

Personally, I think there is a better chance—a long-shot but definitely non-trivial— that the president wants to have the option to request intervention by the military to some end that will help delay or overturn the election results. Esper was the man who pushed back the last time Trump wanted to call in the troops, using the Insurrection Act to justify action against "Antifa" rioters.

As reprehensible and un-American as any of those possible motives are, they would at least be the rational actions of an irrational man, desperate not to be a "loser." Less so, and less noticed, is the firing of other administration officials who have been charged with shaping the country's climate change policies.

Dr. Michael Kuperberg was removed as the chief scientist responsible for the National Climate Assessment, a report produced every four years based on input from thirteen federal agencies as well as outside scientists. In 2018, the report concluded that climate changed posed an "imminent and dire threat" to the United States and its economy. His likely replacement is a professor of geography at the University of Delaware who believes carbon dioxide "is plant food and not a pollutant."

Another casualty is Neil Chatterjee, the man in charge of the agency that regulates the nation's utilities. He was not terminated but only demoted. His offense was less offensive: publicly supporting the use of renewable power.

Presumably, President Biden will be able to reverse or rectify the climate change purges. And he'll put in his own team at the D.O.D. But if there was any doubt that Trump is a petty and vengeful man, without the temperament to occupy the highest office in the land, it's been erased in this weird, lame duck, interregnum period. And it begs the question, who is next?