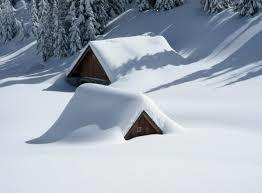 As I watch the snow pile up this morning—the biggest storm in three years, more than a foot here in the exurbs of NYC and three feet in the Catskills—I'm waiting for some science-denying Trumpkopf to say that we could use a little global warming right now. Of course, they would be missing the point that it's not higher temperatures alone that are going to be our problem as the climate changes. Rooftop-high snowmageddons are as much a sign of the disruptive weather patterns we can expect as sweltering heat waves or monster hurricanes.

I am becoming increasingly optimistic that the incoming Biden administration will make combatting climate change a top priority. Appointing John Kerry as a special presidential envoy for the climate, and making it a cabinet level position, is both a statement about the importance of the issue to Biden and a thumb in the eye to his predecessor. I fully expect the new president will keep his promise to rejoin the Paris climate accord on day one of his administration.

Another hopeful sign is Biden's apparent intention to make climate policy an economic issue, not just an environmental problem. It's been two years since the 2018 National Climate Assessment, produced by thirteen federal agencies, predicted that climate change would reduce the size of the American economy by ten percent by century's end. Considering the record-breaking shrinking ice pack in the Arctic, it's a safe bet that the economic damage will be bigger and come sooner.

The appointments of Janet Yellen as Treasury secretary and Brian Deese as National Economic Council director reinforce the strategy of making climate change an economic issue.  If Yellen can take a break from pumping more "stimulus" into the stock market bubble, she has promised to promote "investments that will create jobs and address the tremendous challenge of climate change." And even if he has done time on Wall Street, Deese headed up President Obama's rescue of the auto industry back in 2009, and played a key role in negotiating the Paris climate accord.

But I think the most exciting appointment is that of Pete Buttigieg to be Secretary of Transportation. A big contributor to keeping our promise to reduce emissions will be making electric (and maybe even hydrogen-powered) vehicles mass market, not just Tesla toys for the rich. Someone as intelligent and articulate as Buttigieg has the ability to get that initiative moving.

And imagine Mayor Pete in cabinet meetings, keeping everyone awake with his smart insights and stream of new ideas. Please call him Secretary Pete now, and maybe even someday Mr. President!

So Merry Xmas to all, and here's to a better year in 2021, and an even better four years ahead. Skål!