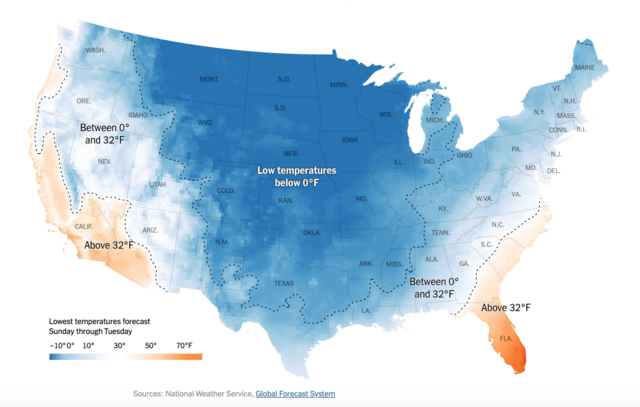 No, that's not sarcasm or a typo. As Al Gore might say, it's an inconvenient truth. The same rising temperatures that are decimating the Arctic ice floe are responsible for unleashing the polar vortex that now has eighty percent of the nation in its grip.

The Arctic is warming at twice the speed as the planet as a whole. Less sea ice reduces the temperature difference with the mid-latitudes, which has consequences for circulation patterns in the atmosphere, like prolonged heat waves in the summer, or frigid conditions in winter. If you want to know all the details, read this. It's as complicated as it's counter-intuitive, but no less ominous.

It ought to be required reading for the three million Texans who are currently without any power or subject to rolling blackouts, and especially for their governor, Trump dead-ender Greg Abbott. He went on Fox News's Hannity Show last night to proclaim, "Our wind and our solar got shot down and they were collectively more than 10 percent of our power grid. And that thrust Texas into this situation…This shows how the Green New Deal would be a deadly deal for the United States of America."

His blame game is particularly egregious, considering that a spokesman for the company that operates the electric grid in Texas had said hours earlier that frozen wind turbines were "the least significant factor in the blackouts," and noted that the main culprits were "frozen instruments at natural gas, coal and even nuclear facilities."

If facing up to the truth of global climate change is too much for the Governor, perhaps he should instruct the grid to purchase more electricity at an unconscionable mark-up from one of the many middlemen who exploit the system. Jake Krimmer, for example, the protagonist of my novel, The Eleventh Grieve, who before he redeems himself is making a fortune trading electricity futures off the miseries of climate change, a.k.a. weird weather. Alas, he's fictional, and I'm still waiting for a publisher to discover him, so the governor best consult the experts cited above, and stop fraternizing with the clowns on Fox News.