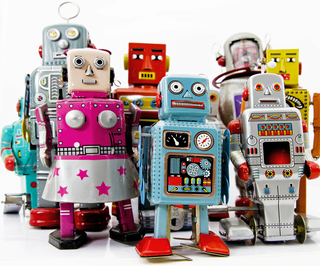 Still, other than the occasional Roomba vacuum cleaner or Robomow lawnmower (my favorite), most of us still haven’t seen a robot in action. That’s because they work largely behind the scenes on the factory floor. It’s also because they tend to look nothing like the bipedal, anthropomorphic, android robots of our imagination and our toy stores. Today’s robots are designed to do very specific functions that may require one arm or three, or no arms and legs at all. Or if they are sexbots, they may require any of the above plus body parts currently beyond our technical capabilities (although they’re coming, too.)

We are living at the very beginning of not just a robot revolution, but also of robotic evolution. And just as Mother Nature abhors a vacuum, so does Silicon Valley and its various offshoots. Everything robotic that can be tried will be tried. So in an effort to keep everyone up to speed, here are videos of three of the more interesting robots being touted as a potential next big thing. All are well worth sampling.

Anyone who’s every attempted to assemble a piece of Ikea furniture, knows the perils of instructions translated from the Swedish into an unspecified third-world language, and then back to English. These robots couldn’t care less.

The mystery is not how Amazon can carry so many different products, it’s how they can find them in their warehouse and get them delivered to you the next day. If only Indiana Jones had Amazon’s robotic capabilities, we’d know where to find the Ark of the Covenant in a heartbeat.

For devotees of Simple Simon or Patty Cake games, nothing will ever beat this robot who (that, which?) is programmed to faithfully mimic human gestures.

I’ll continue to keep looking for other examples of this new silicon-based life form. In the meantime, I’m finishing edits on my climate-change novel, The Eleventh Grieve. I’ll be heading down to DC in early May to pitch it to five lucky agents at a writer’s conference sponsored by the Washington Independent Review of Books. So stand by for more news.

If you haven't subscribed already, and want future blogs to be sent directly to your emailbox, please click here!
Be the first to comment