The Trend is Not Your Friend 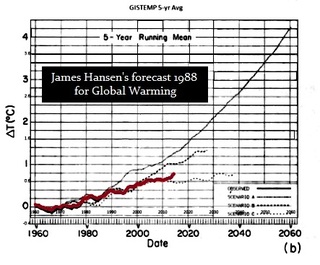 The text you type here will appear directly below the image
Although it may not always seem that way to cable new viewers, Stormy Daniels isn’t the only meteorological phenomenon that the media is covering. There’s been a noticeable uptick in stories about climate change, thanks to the thirty-year anniversary of then-NASA scientist James Hansen’s testimony before the Senate Committee on Energy and Natural Resources. It was that hearing that first brought the concepts of greenhouse gases and global warming to the public’s attention.

Thirty years after Hansen’s seminal testimony, our president has declared climate change fake news, Congress is still dithering, and the news media are doing their best to confuse the issue.

The Wall Street Journal published an article last week headlined “Thirty Years On, How Well Do Global Warming Predictions Stand Up?” Their conclusion, we’re only modestly warmer. As if that makes everything OK.

The wing nut peanut gallery took it one step further. Based on the same data (see chart above), their take was “30 years of Global Warming Forecasts All Failed.”

Count on the New York Times to be the voice of reason. In an opinion piece in last Sunday’s Review section, the conclusion was that “A Prophet of Doom Was Right About the Climate.”

The Times article explained that Hansen offered up three scenarios, a best, worst, and most-likely, represented by the top, bottom, and middle (thin) lines in the chart. Until the past few years, the actual increase in temperature (the thick red line), about .8 degrees Centigrade, has more or less correlated with the best-case estimate, although it is now heading up toward the most-likely. Hansen feels he initially overestimated the most-likely increase because of the primitive computing power he had at his disposal in 1988, and a faster decline in the amount of refrigerant gases released into the atmosphere, thanks to a global treaty called the Montreal Protocol.

Nonetheless, the world is demonstrably warmer today than it was in 1988, and the trend is not our friend. At the time, 1988 was the hottest year in average global temperature stretching back to the nineteenth century. It no longer makes the top 20, and every year this century has been hotter. Some prognosticators are forecasting that 2018 will be the hottest yet. So it’s hard to understand how anyone with a modicum of intelligence would gloat that a 30-year-old prediction was inaccurate, or downplay its significance.

If charts are not your thing, you might start paying attention to the evening news, which more often than not leads off with the latest weather disaster. Although scientists are reluctant to make the connection, common sense suggests that these increasingly frequent calamities are likely to have something to do with climate change.

Decide for yourself if they’re telling you something about the climate. In any case, you’ll be able to read more about weird weather when The Eleventh Grieve in no longer forthcoming, but published. Sooner rather than later, I hope!