Cut Down Trees to Save the Planet? Why not, if it works? 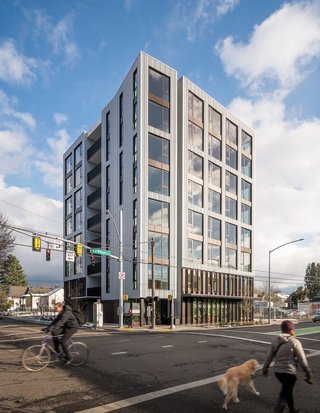 Have a look at this eight-story condo. If you think it's just another ordinary apartment building, you'd be grossly mistaken. It's the Carbon12 tower in Portland, Oregon, the tallest wooden structure in the country. And it's a midget compared to the Mjosa tower in Norway, the tallest wooden building in the world. At 280 feet, that pride of Norway is only twenty-five feet shorter than the Statue of Liberty.

The secret? CLT, or cross-laminated timber—plywood on steroids—that allows architects to build tall, fire-safe, and earthquake-resistant buildings, and make them attractive to boot.

What about the trees? Trees are one of our great allies in combating climate change. The remove carbon dioxide from the atmosphere and store it in their wood. In a world that is distraught about the burning of the Amazon rain forest and the wildfires in California, how can we countenance building new structures from wood?

The answer, according to three experts in an op-ed column in the New York Times, is that wooden buildings are more climate-friendly than concrete and steel construction. One study found that building a five-story office building with wood had less than a third of the global warming impact than a conventional building of the same size. And eco-friendly Scandinavia is not investing in wooden buildings to accelerate the demise of the planet.

Plus, if wooden construction became the norm, the profit potential would incentivize better, renewable forest management and halt the conversion of woodlands to other uses, such as more housing sub-divs and shopping centers in a nation which is already residentially and commercially overbuilt. Another study estimates that with state-of-the-art management, the forests in northern New England alone could remove as much carbon from the atmosphere over twenty years as would be released by seven million cars.

So perhaps "Woodman, spare that tree!" is too simplistic. Worth thinking about, for sure, in an age sorely in need of new initiatives and solutions to combat the insidious advance of climate change.