What Else Is He Deliberately Downplaying? 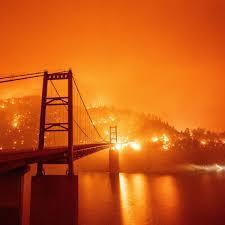 You know who he is. He's the leader of a nation who believes the nation is better off not knowing the truth. He can tell Bob Woodward that COVID-19 is "more deadly than even your strenuous flus," while reassuring the nation that it will disappear "like a miracle." Many people believed what he knew to be true was a lie, a hoax. Many died for believing it. Many more will live with serious and lingering aftereffects, not only to their lungs and other organs, but neurological problems including a viral attack on the brain.

Jump to the fires ravaging California and Oregon and Washington. He falsely claimed that climate change was a hoax invented by China, and suggested that if only we "raked our forests" like Finland we wouldn't have this problem. Sound familiar?

Many people will die for believing him. Many more will die as our way of life becomes unrecognizable, on a planet where tragedy brought on by a changing climate—by fire, water, wind, and ice—will become an everyday occurrence.

Are his attempts to bolster his political fortunes by downplaying the truth worth this "American carnage?"

I put this blog on pause when the virus began to sweep the nation, believing that few of us had the mental bandwidth to deal with more than one overwhelming problem at a time. But it seems to me to be the right time now, to begin to speak out again. We are already in the midst of an election that will not only decide how we handle the ongoing pandemic and it's economic fallout, but also the long term prospects for our way of life, and perhaps even life itself on this planet.

Despite his stated concerns to Woodward about our emotional well-being, I for one believe it's time to panic.