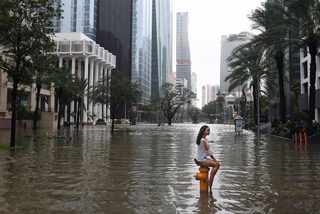 Walls fell into disrepute under the administration of the former guy. But walls can have justifiably commendable purposes.

The U.S. Army Corps of Engineers has just proposed building a six-mile, six-billon dollar, up-to-twenty-foot-high seawall around and through Miami. The proposal is the result of a federal government study in the wake of the destructive storm surge damage caused by Hurricane Irma in 2017. A one-mile stretch of the seawall would be built right on Biscayne Bay, surrounding a neighborhood studded with gleaming high-rise towers. Imagine the sound barriers along an interstate highway and you'll get an idea of the new ambiance.

Predictably, politicians and residents are up in arms. They like other parts of the proposal, such as government subsidies for elevating thousands of private homes. But ruin the view and hurt property values, no way. Not much different than the residents of Cape Cod objecting to renewable-energy windmills in Nantucket Sound.

Selfishness and shortsightedness are just two of the many obstacles America faces as it attempts to prepare for the new normal, or "the Torments," as I characterize them in my recently completed epic (that means long), social, sci-fi novel, The Grand Plan.

For those of you wondering why I went dark these past few months, I've been working furiously to finish a "beta version," not a first draft but not a finished work either. The Grand Plan is a reimagining of the creation story of civilized humankind, based on the ancient Sumerian stories and poems. It attempts to weave together an exciting adventure story and the hero's emotional journey with the biggest social issue of all, how we've screwed up Mother Earth.

I have a few slots open for "beta readers" to help me polish it and eliminate the boring bits. If you think you might be interested in helping me, scroll down for the "book jacket copy" and send me an email if you're willing to both read and offer some constructive criticism.

Earth is threatened by runaway global warming and social turmoil, as carbon dioxide trapped in the oceans pours into the atmosphere, bringing on a weather system gone haywire and the unbearable living conditions of "the Torments."

Chief Scientist Nick Adamstock and the crew of the Abzu set off on a daring for-profit venture to a forbidding planet five light-years distant to mine the gold desperately needed for artificial photosynthesis. But the Abzu's revolutionary propulsion technology malfunctions, and they are marooned on an idyllic planet that bears a remarkable resemblance to Earth before the onset of civilization.

As they await rescue, Nick becomes emotionally involved with both Helena Enturian, the Abzu's doctor, and Ava, an attractive and exceptional member of a clan of primitive inhabitants. Nick and Helena's discovery that the hunter-gatherers are genetically similar to humans makes them question if they are part of a "grand plan" to speed up the development of "the People"—introducing them to free-market precepts and practical inventions, and possibly even modifying their DNA.

How they ultimately deal with their philosophical, moral, and emotional dilemmas changes the lives of all concerned and raises profound questions about the fate of Earth and humankind's place in the universe.