The Limits of Optimism 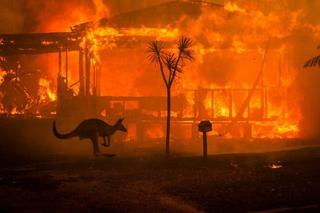 As we usher in 2020, this eponymous year for perfect vision, I find it very difficult to see a rosy future for the planet. Flaming neon orange seems to be winning out.

An entire continent is burning in the southern hemisphere, while the prime minister vacations in Hawaii and panders to the coal industry for more donations. The "police are now working on the premise arson is to blame," while the deputy prime minister floats the idea that the real culprit is "horse manure, self-combusting." The only explanation for this mad climate-change denial is that when the temperature regularly soars to 110 to 120 degrees Fahrenheit, it tends to fry the brain.

In Washington the Trump administration continues its war on science, ignoring, distorting, or marginalizing any and all scientific data, first and foremost but not exclusively, any data that relates to climate change. As the evisceration of the Environmental Protection Agency and other watchdog organizations continues unabated, and rules and regulations meant to protect the health and well-being of ordinary citizens are consigned to the trash bin, the White House trumpets "Businesses are finally being freed of Washington's overreach and the American economy is flourishing as a result."

Meanwhile, the Greenland ice sheet continues to melt seven times faster than in the 1990s, the UN climate change conference in Madrid ends in disarray, and half a billion animals are likely to perish in the living Hell down under. The Green New Deal remains a third-rail issue, and according to a Vegas sports book, reflecting how people are betting in real time, Trumps' odds of winning reelection after ordering the assassination of an Iranian general are at an all time high.

David Brooks, the New York Times' cuddly conservative columnist, thinks the prediction of a Trump victory is wishful thinking. In his own version of same, a column entitled, "A Ridiculously Optimistic History of the Next Decade," he foresees a landslide for the Dems, including winning both houses of Congress. As he segued from politics into his prognosis for cultural and social issues, I was relishing his wisdom and prescience until I reached the last line and realized that not once in this "ridiculously optimistic" assessment, had he made his forecast known about the fight against climate change. In fact, climate change is never mentioned. What does that say about the limits of optimism?