The "Piketty Problem" Only Gets Worse 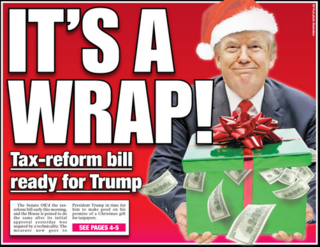 “It’s going to be one of the great Christmas gifts to middle-income people,” is how President Trump characterized the Republican tax bill before he boarded a helicopter for meetings at Camp David last Saturday. Like many statements from our president, it falls into that gray area between a self-serving exaggeration and an outright lie. Although all the details have not yet been shared with the public, the broad strokes of the bill are certain to worsen America’s “Piketty Problem”—the corrosive economic inequality that separates the very wealthy from the rest of us and makes a mockery of our cherished conception of “middle class.”

The French economist Thomas Piketty detailed the enormous wealth gap in his 2014 best-selling book, Capital in the 21st Century, but most people didn’t need to be reminded. According to a new CareerBuilder survey, almost 80% of U.S. workers live paycheck to paycheck. Three out of four say they are in debt today, and more than half think they will always be. Most minimum wage workers have to work more than one job to make ends meet.

That $2,000 a year savings comes to less than $40 a week for a family that is already among the top third in household income. You be the judge about whether characterizing that increase as “very large” is excusable, coming from a man who probably spends that much per week for shoe shines.

Moreover, giving my Excel spreadsheet a workout with the newly published tax brackets, the two-thirds of American families below that $75,000 household will be lucky to see $10-$15 more a week in their paychecks. As for that $150,000 a year family that is just at the threshold of being in the top 10 percent, they will receive $75 more a week according to Mnuchin, further widening the wealth gap.

What increase the top 1 percent will receive, households with incomes above $450,00, is currently classified Top Secret. But we can be sure that they will be the principal beneficiaries of the new deductions for “pass-through” businesses, even if they have few employees, such as real estate moguls like flip-flopping Senator (“I’ll never vote for anything that raised the deficit”) Bob Corker and (dare we mention?) Donald Trump.

As for the vaunted corporate tax cut helping out the middle class through increased hiring and higher wages, ‘fuggedaboudit,” as one of those middle-class New Yorkers might say.

First, the corporate tax cut is not as big as it looks. Few companies pay the 35 percent rate. The Treasury Department estimates the effective corporate tax rate at 22 percent, the Government Accountability Office at 13 percent.

Second, there is little corporate appetite to pay out any tax windfalls to employees rather than stockholders. See my blog, "The Law of Unintended Consequences," for a fuller discussion.

Third, a provision in the bill that allows for immediate depreciation of all capital investments is likely to spur investment in robots rather than workers. See my blog, "Jobs for Robots," for the details.

Thanks to the complexity of the tax code, and the incomplete details released to the public, it’s currently impossible to estimate how much worse America’s “Piketty Problem” will become with the passage of the bill. But that the problem will become worse is inevitable. Perhaps that’s why Santa was last seen eschewing his sleigh for a golf cart, with his Cheez-Whiz souflee hairdo peeking out from beneath his traditional conical cap, crowing, “Merry Christmas to me, and to you, good luck.”

Here’s wishing you a happy holiday season, and a healthy and prosperous New Year....Garth