Meet the Man Behind the Curtain: Don McGahn 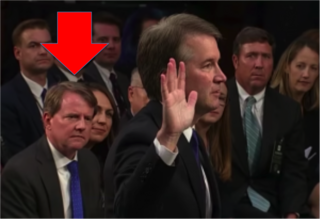 “There’s nobody with a squeaky clean past like Brett Kavanaugh,” Mr. Trump told reporters Saturday night in Topeka, Kansas, as he dismissed allegations of sexual assault and misconduct by his new Supreme Court justice.

Ironically, Trump’s customary mangling of the English language led him into accidentally uttering a rare truth. Based on the reports in the media these past few weeks, there is no one indeed, with a squeaky clean past who would even think about behaving anything like what the country heard about Justice Kavanaugh’s behavior back at Georgetown Prep and Yale.

Whether or not Kavanaugh was actually guilty of sexually assaulting Dr. Christine Blasey Ford, there was more than enough reliable testimony from people who knew him at the time to indicate that he was often in an inebriated state that would have been conducive to such an assault. In fact, his drinking was central to Dr. Ford’s testimony before the Judiciary Committee. She described him as “visibly drunk” and “drunkenly laughing during the attack.”

The Republican response was to maintain that Kavanaugh’s adolescent and post-adolescent drinking habits were youthful hijinks and therefore not relevant to his fitness to serve on the Court. Nor were his equivocation and evasion and insolence about those drinking habits under oath any reason to question that fitness.

In other words, the ballyhooed supplemental FBI investigation was to be limited to the sexual assault charge—did he or didn’t he—and not to any circumstantial evidence about his lifestyle or misogynistic attitudes. And the witnesses that the FBI was permitted to interview was focused on individuals like Mark Judge and PJ Smyth who arguably had their own self-serving reasons for their lack of “recollection” (which BTW, is several degrees of separation from “refutation,” as it was characterized by Kavanaugh himself, among others.)

This curious approach to a search for the truth was a linchpin of the three-pronged confirmation strategy masterminded by White House counsel and all-around Republican Svengali Don McGahn II, who was instrumental in persuading Trump to nominate Kavanaugh in the first place. First, deny everything, like their hero, the man in the high castle. Second, make it all about sex, not beer. Third, when all appears lost, resort to anger, partisanship, and vehement denial, all wrapped in the mantle of a just man ruined.

The New York Times reports that after seeing Dr. Blasey Ford’s testimony, President Trump had an uncharacteristic moment of empathy and tried to call McGahn to tell him that it was time to bring in the FBI to fully investigate her charges. McGahn actually had the temerity not to take the call. Instead, he sat with Kavanaugh and his wife and told him that the only way to save his nomination was to fight back with fire and fury.

It would not be surprising if McGahn also had a hand in Chief Justice Roberts’s decision to sit on the more than a dozen complaints of judicial misconduct he received during the past few weeks from Kavanaugh’s fellow judges on the U.S. Court of Appeals for the D.C. Circuit. Good Soldier Roberts chose not to refer them to a judicial panel for further investigation, despite, or perhaps because of the doubt they cast on Kavanaugh’s prior testimony about his work in the Bush administration. And now, after Kavanaugh has been confirmed, the details of the complaints are likely to be dismissed and never made public.

One has to wonder if Roberts’s inaction is somehow related to the unseemly haste with which Kavanaugh was sworn in under cover of darkness back in Washington, even as our President was attempting to portray his new Justice as “squeaky clean.” Think about that as Trump attempts to compete with major league baseball in prime time Tuesday night, with the “ceremonial” swearing-in of the First Boy Scout.

As for McGahn, now that he has successfully completed his dirty job of solidifying a conservative majority on the Court at the expense of national unity, he plans to step down from his White House job this fall. But it’s a sure bet that teams of reporters from those bastions of fake news like the New York Times, the Washington Post, and the New Yorker are hot on the trail of those twenty or thirty individuals whose names were referred to the FBI but not followed up on, and who might have something more to say about our new Supreme Court justice.

Depending on what the press finds and the mood of the electorate come November, any further details that are revealed could lead to an investigation by a newly Democratic House of Representatives. But whether the complete truth will ever emerge, especially that pertaining to the sexual assault charges, is questionable. What is not questionable is what this whole sordid mess reaffirms about the state of the nation. America is in trouble.