Life on the "Barbie" 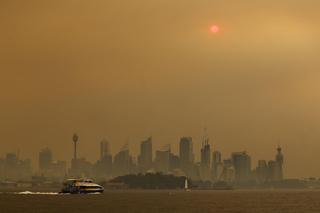 No, not the doll. The backyard grill.

Used to be that Australians were best known for that iconic Tourism Commission commercial where Crocodile Dundee promised Americans to "slip a shrimp on the barbie." Today, it's the Australian people themselves who are getting broiled.

Bushfires, as they're referred to Down Under, have been raging across the country for months, fed by a severe, ongoing drought, high winds, and summer temperatures in excess of 100 degrees Fahrenheit. As many as 140 fires have been blazing in the past few days. Six lives and more than 700 homes have been lost. A megafire north of Sydney—"it's too big to put out"—that has been burning since early November, has transformed the "Emerald City" sky into an unhealthy and depressing palette of orange and gray and ocher.

This unfolding disaster is happening in a country whose government is in the same state of denial about climate change as the Trump administration. Prime Minister Scott Morrison has suggested that some types of climate change demonstrations should be outlawed, and has refused to meet with firefighters who are desperate for more resources to battle the flames.

As reservoirs run dry in Australia, and tough water restrictions are imposed, we can be thankful that according to our president, we have nothing to worry about over here, other than our need to "flush the toilet 10 times, 15 times, as opposed to once."

Taking a short break from hurling invective about the impeachment inquiry, the noted germophobe-in-chief elaborated on his concerns by saying, "You go into a new building or a new house or a new home and they have standards, only you don't get water. You can't wash your hands practically, there's so little water comes out of the faucet. And the end result is you leave the faucet on and it takes you much longer to wash your hands…They end up using more water. So (the) EPA is looking at that very strongly at my suggestion."

Presumably our president's suggestion is to roll back regulations on low-flush toilets and controlled-flow faucets. Sadly, arguing for our use of more water on an increasingly water-starved planet, doesn't reach the standard of a high crime or misdemeanor. It's merely inane and shortsighted, but what else is new?

Breaking News – Time has named Greta Thunberg as their "Person of the Year." More on that next week.