The Climate Change Follies — Act One 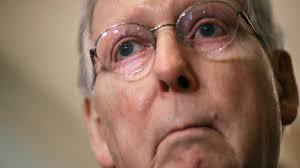 There are times when the level of public discourse about an important issue becomes so depressing that the only logical response is to laugh through the tears. This may be one of those times in regard to climate change. Here are a few of the recent developments...

…In cased you didn't get the word, President Trump and Mitch McConnell, leader of the moral invertebrates in the Republican Party and Principal Choreographer of The Climate Change Follies, are for the Green New Deal, Nancy Pelosi is against it. Trump and McConnell want to brand the Democrats socialists, Trump on the campaign trail, McConnell in Congress. The outcome is preordained, but by bringing the bill to a vote, McConnell hopes to embarrass Democrats who vote No, and tar those with the S-word who vote Yes. Pelosi, who is on record dismissing the bill as "The green dream or whatever they call it," is wise to the Republican ploy, and simply wants to crawl to a hole and hide. But by playing politics, both sides are putting self-interest ahead of an informed discussion about what's right for the good of the nation and the future of the planet.

…Sebastian Gorka, Fox News commentator and would-be Deputy Assistant to the President (he failed the security clearance and wasn't important enough for Trump to overrule the intelligence community) is someone who clearly didn't get the word. He railed before CPAC, the Conservative Political Action Conference, about the Green New Deal, "They want to take your pickup truck! They want to rebuild your home! They want to take away your hamburgers! This is what Stalin dreamt about but never achieved!"

The threat of the gulag must be Mitch McConnell's latest Republican talking point. In a bitingly satiric, must-read column in the New York Times, David Bentley Hart describes conservative economist's Ben Stein's appearance on Fox News as "like some grim heathen god, exuding all the effervescent charm of a despondent tree sloth, glumly wobbling his jowls and opining that Representative Alexandria Ocasio-Cortez espouses a political philosophy that in the past led to the rise of Hitler and Stalin." Full disclosure: Ben was my college fraternity brother. As I recall, he aspired to be a stand-up comic, one career among many that he pursued with some degree of success before turning to wrong-headed economic punditry.

BTW, I wasn't kidding when I said you must read this column! More follies next time...