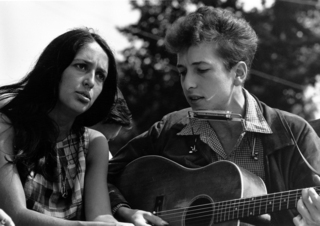 Two of the greats

Can popular music be a force for societal change? What an irrelevant question for anyone who came of age in the 1960s, when most popular music was all about political action. Pete Seeger, the Weavers, Peter, Paul, and Mary, Bob Dylan, Joan Baez, Arlo Guthrie, the list goes on and on, from the lyrical soliloquy of “Where Have All the Flowers Gone?” to the anthem of “We Shall Overcome.”

So where’s popular music today on the Resistance spectrum? Ironically, that question was raised by a recent article in the New York Times reporting about a neo-classical concert of three “politically thoughtful” orchestral and vocal pieces being performed at the Institute of Advanced Study in Princeton. Talk about rarified atmosphere, that’s where Einstein once held court. “One of the problems that I’ve always thought about it is that the people who go see music probably are not the people whose minds need to be changed,” one of the composers commented.

Amen, was my reaction. I love Beethoven’s Fidelio as much as the next classical music guy, but music is only going to have an impact if you get it out of the concert hall and into the earbuds and onto the streets.

Full disclosure: my knowledge and personal taste in popular music hasn’t progressed much beyond those folk heroes cited above. So I had to consult the Google to find out what was happening, and boy, was I surprised.

First things first. There’s a lot of popular music out there that is specifically anti-Trump, and much of it's coming from folk and rock royalty. Bruce Springsteen’s “That’s What Makes Us Great” (with Joe Grushecky and the Houserockers) bemoans our president’s anti-immigration stance—“Some wanna slam the door, Instead of opening the gate.” Eminem’s “The Storm (Freestyle)” rants that “what we got in office now's a kamikaze, That'll prolly [probably] cause a nuclear holocaust.” Joan Baez is more restrained in “Nasty Man,” singing in that unforgettable reedy voice, now just a little deeper, “You’re gonna build a wall, the bigli-est wall, the beautiful-ist wall, around our borders. But here’s what I think, you better talk to a shrink, ‘cuz you’ve got serious psychological disorders.”

But here’s the catch. I may be wrong, but none of this music has seemed to catch fire. Sure, “Nasty Man” has over 5 million views on Facebook, but that’s a medium that doesn’t ask for any action that requires more effort than a “Like.” After Eminem debuted “The Storm” last month at the BET Hip Hop Awards, the Tweets were loud and profane against music that served a political purpose. And Bruce Springsteen, is now quoted in Variety as saying, “Topical writing at the moment doesn't hold a lot of interest to me…I'm not driven to write any anti-Trump diatribe; that doesn't feel necessary at the moment."

So will politically inspired popular music ever be successful, commercially or politically? What dark forces are at work to keep a lid on it? Are they even dark, or are they simply a reflection of popular music fan’s short attention spans and preference for the personal?

I’m the last person to know the answer, and I’d welcome your comments. But I do have a great deal of sympathy for that sixties-warrior Joan Baez’s opinion when asked by Rolling Stone, “How important is music to today's resistance.” Her answer: “There's not enough right now. There needs to be more. It's terribly important, because that's what keeps the spirit. Carping and shouting, as much as it gets stuff off your chest in front of 100,000, you really need something uplifting…The problem right now is we have no anthem.”

So maybe it all comes down to the music after all. Not just what it says, but how it moves you, how you feel it in your gut. Like we did back then.