In Case You Missed It, Part Two 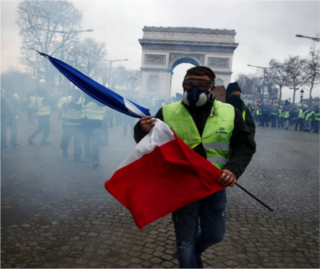 Thousands of environmental experts are now gathered in Poland for the United Nations’ 24th annual climate change conference. The goal is to establish rules for carrying out the Paris accord to limit the rise in global temperatures to less than 2 degrees Centigrade, or 3.6 Fahrenheit. Just prior to the conference, Poland, which has the highest domestic coal production in Europe, and is home to 33 of the 50 most polluted cities in EU, announced that it planned to invest in more new coal capacity in the coming year.

The UN conference comes on the heels of several other recent disheartening developments, presented mostly without comment…

…After several weeks of protests, Paris is virtually on lockdown as the “Yellow Vests” express their rage about taxes and salaries. The spark that ignited the riots was a planned increase in France’s fuel tax, designed to help the country meet its carbon reduction pledge.

…Le Grand Orange responded on Twitter "I am glad that my friend Emmanuel Macron and the protestors in Paris have agreed with the conclusion I reached two years ago. The Paris Agreement is fatally flawed because it raises the price of energy for responsible countries while whitewashing some of the worst polluters....in the world. I want clean air and clean water and have been making great strides in improving America’s environment. But American taxpayers – and American workers – shouldn’t pay to clean up others countries’ pollution."

…According to new research from the Global Carbon Project, a group of more than 100 scientists from more than 50 academic and research institutions, the rate of carbon dioxide emissions in increasing like a “speeding freight train.” After a three-year plateau, worldwide carbon emissions increased 1.6 percent in 2017 and are projected to rise another 2.7 percent this year.

…A comprehensive new study from the World Resources Institute, an environmental group, calculated that to produce enough food to feed the worldwide population in 2050, the amount of forests that would need to be converted into farmland would be twice the size of India, making it virtually impossible to stay below the Paris accord goal. The authors suggest that a possible strategy for sustainable agriculture would be to persuade consumers in the US and Europe to cut down their consumption of meat by 40 percent by 2050.

…But not to worry about 2050. Three climate experts warned in the prestigious science journal Nature “there’s a good chance that we could breach the 1.5 C level by 2030.”

…On a lighter note, if there is such a thing, Sushi lovers beware! Climate change is warming up the oceans around Japan, causing various species of the poisonous pufferfish to inter-breed, creating a sudden increase in the number of hybrids and making it difficult for fisherman and seafood distributors to sort out the real fugu from the fake, increasing the danger of fatal accidents.