In case you missed it...In His Own Words - Part I 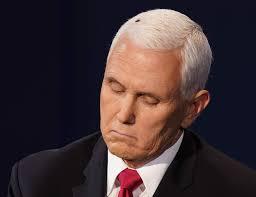 The following is Part I of an unedited excerpt from last night's vice-presidential debate between Sen. Kamala Harris and V.P. Mike Pence, with USA Today's Susan Page as moderator. It is forwarded as a public service to provide you with a clear understanding of the Trump administration's thinking (sic) about climate change.

Susan Page: (32:37)
Thank you very much Vice President Pence. I'd like to pose the first question to you.

This year, we've seen record-setting hurricanes in the South. Another one, Hurricane Delta, is now threatening the Gulf, and we have seen record-setting wildfires in the West. Do you believe as the scientific community has concluded, that man-made climate change has made wildfires bigger, hotter, and more deadly and have made hurricanes wetter, slower and more damaging?

You have two minutes uninterrupted.

Mike Pence: (33:15)
Thank you, Susan. Well, first, I'm very proud of our record on the environment, on conservation. According to all of the best estimates, our air and land are cleaner than any time ever recorded. Our water is among the cleanest in the world. And just a little while ago, the president signed the Outdoors Act. It's the largest investment in our public lands and public parks in 100 years. So President Trump has made a commitment to conservation and to the environment.

Mike Pence: (33:44)
Now with regard to climate change, the climate is changing, but the issue is what's the cause and what do we do about it? President Trump has made it clear that we're going to continue to listen to the science. Now Joe Biden and Kamala Harris would put us back in the Paris Climate Accord. They'd impose the Green New Deal, which would crush American energy, would increase the energy costs of American families in their homes, and literally would crush American jobs.

Mike Pence: (34:13)
And President Trump and I believe that the progress that we have made in a cleaner environment has been happening precisely because we have a strong, free market economy.

What's remarkable is the United States has reduced CO2 more than the countries that are still in the Paris Climate Accord, but we've done it through innovation. And we've done it through natural gas and fracking, which Senator, the American people can go look at the record. I know Joe Biden says otherwise now, as you do, but the both of you repeatedly committed to abolishing fossil fuel and banning of fracking.

And so by creating the kind of American innovation, we're actually steering toward a stronger and better environment.

With regard to wildfires, President Trump and I believe that forest management has to be front and center. And even Governor Gavin Newsom from your state has agreed, we've got to work on forest management.

And with regard to hurricanes, the National Oceanic Administration tells us that actually as difficult as they are, there are no more hurricanes today than there were 100 years ago-

Mike Pence: (35:26)
… use hurricanes and wildfires to try and sell the goods of a Green New Deal. And President Trump and I are going to always put-