A Modest Proposal from Grandma Swift 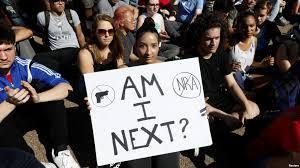 This is a guest post from Marian Armstrong Rogers, author of Astonishments: Stories as True as Memory

Now, you have no idea what I’m going to say about guns until you hear me out, so please do…

I was once the proud owner of a gun. Loved that little water pistol. Never owned a real gun, or even thought about it. When I talk about my schooldays, my grandchildren don’t believe me. Of course, those same years my black brothers and sisters down south were wondering which way to run to escape Jim Crow’s hefty guns and other deadly dealings.

But now there are mass shootings at concerts, nightclubs, hospitals, even schools where children not far from infancy are mowed down by others not far from childhood! Road-rage? Going postal? Sweet Jesus, I never heard such weirdly descriptive terms ‘til every hair on my head was gray and standing straight up at the thought of what they mean.

Truth be told, I don’t like feeling afraid when I’m walking down an empty sidewalk. So instead of burying myself in a book I’ve been mulling this problem over, listening to the debates, considering the latest proposal to keep our children safe: training school teachers to shoot guns and keep one nearby (where? in a desk? a pocket? tucked into a belt?), in case a deranged shooter suddenly appears, and I’ve come up with a solution of my own.

It’s even more outrageous than arming the kiddies’ teachers. You’ll think I’ve finally slipped off the cracker. In fact, I myself wonder if I’m going mad, along with the rest of the country. Could be. But trust me, if nothing else, this solution will tickle you NRA members to death…

I say arm everyone! The young, the old, the in-between; the well and infirm; the calm and agitated; the contented and frustrated. Throw away those water pistols! Give the kiddies tiny guns that look real and shoot cotton-ball bullets tipped with a touch of glue so they’ll stick to the bulls-eyes you train them to aim for. Instead of hankies pinned to their dresses (as I once wore), little girls can go to school with practice-guns holstered and slung over their shoulders, boys, too. They’ll love it. And when they reach puberty they’ll be ready to defend themselves just like everyone else will be doing.

A frustrated teacher dangerously untethered from the frayed end of her rope? Bam!
An emotionally unstable boy (or young man, or girl)? Bam!
A slashing, subway-shove, ‘postal’ event? Pull those guns out as you go down: Bam! Bam! Bam! (You die a hero. You’ve done humanity a service).

Oh yes, and road-rage? Well, just put those AR-15s on the seat next to you, everybody, they’re bigger, more powerful, more destructive; and just as countries need bigger, better nuclear weapons so that other countries with bigger, better nuclear weapons will not dare use them (or we all die, one), we citizens need AR-15s. Then? Voila, no more road-rage!

Oh dear, I’m not thinking clearly: even AR-15s, even threats of nuclear destruction, won’t deter someone who’s mentally ill, maybe we should just eliminate them (the mentally ill, I mean). It’s been done.

Yes, life would be more uncertain than it already is, would be horrid, actually. But only until we got used to fearing each other! And while we adjusted to that new reality, think how much we’d reduce the problem of overpopulation on our planet.

Once, I imagined sitting in a rocking chair on a porch, sipping tea when I reached the age I am now. Tea’s in my hand (a bit of something in it, if you must know), but I’ve no rocking chair. Don’t want one. We oldsters are active—some, closing in on a hundred, still dancing, still lifting those heavy rifles to shrinking shoulders.

We’ve advanced in medicine; communication; life-styles (think Viagra, men!); and, yes, weaponry; but Lord help us, not in humanity, not when children in school fear for their lives, not when we’ve created a society in which their innocence has been lost. Yes, it’s already lost. So, with sadness in my heart, I say…

What are you waiting for, NRA? Get those guns in those young hands! Get them in these old arthritic hands like mine! And before it slips my mind (things do), I want to thank you for defending the amendment that gives us the right to bear those arms. When did you begin doing that? It couldn’t have been in December 1791, when the second amendment was adopted as part of our constitution, when none of us was even a gleam in great-granddaddy’s granddaddy’s eyes, when guns were muskets and flintlocks that shot musket-balls that looked like lead marbles. To think we won our independence from Great Britain using such primitive weapons—it boggles the mind!

There were cannons then, too, and a person could own one if he had a mind to. After all, we had no army, no national police; just lone sheriffs, in territories full of outlaws and Indians, who kept the peace with the help of armed townsmen—remember “Gunsmoke?” With Matt Dillon? Wahoo! Now, that told the story! (Or was it based on fake news?) Good lord, 1791 was almost three centuries ago! Tell me, do NRA members ever think about that fact and puzzle over it? A little?

Oh, smooth your ruffled feathers, gunslingers, I’m not suggesting our founding fathers never intended us to use assault weapons. Who can know?

Throw that argument out! Like I said, just as our country needs more deadly weapons, we people do too. Women especially. In fact, I’m hoping someone will design pocket-pistols that fire radioactive pellets that do not kill but embed themselves in a target’s soft spot (or uh, maybe hard). I envision mother-of-pearl insets in the handles. Mmmm Mmm, wouldn’t that fix those gosh dang abusers?

But listen, don’t waste time defending that ancient second amendment, write a new one! You have the power to get it ratified, just keep that gun-lobby going; keep throwing millions to our esteemed statesmen (Damn! We don’t have statesmen now, do we? I forgot).

Okay, so throw the money at politicians who pass themselves off as statesmen. Keep them afraid they’ll lose the vote. Never mind lost lives, that’s collateral damage (at least I think so, didn’t ‘collateral’ used to mean security?) Oh well.

One last thing: you must change that name of yours! An organization called the National Rifle Association, always referred to as the NRA, doesn’t fit this time and place (and certainly won’t when we’re all carrying pistols or assault rifles or both). You need a name that describes your new role, something perfect, something like ‘the Association of State Security’. Then, instead of being called the NRA, you’d be called a perfect ASS.