Something to Take Your Mind Off COVID-19 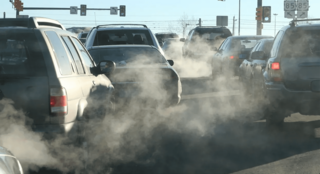 As we watch the COVID-19 death curve continue its relentless climb every day, it's understandably difficult to have room in our brains to worry about anything else. Tuesday night's televised White House briefing offered the most chilling news yet, a stark prediction that 100,000 to 240,000 American deaths is our best-case scenario. Even the President finally seemed to be tuning in to the gravity of the situation. What one talking head had nicknamed the Six-o'clock Follies suddenly became a solemn Requiem for business-as-usual in our nation and our carefree way of life.

But worry we should. While the President was parading his newfound empathy and gravitas, as well as his recently discovered respect for science, his Environmental Protection Agency (sic) was announcing that it had rolled back the Obama-era Clean Car Standards that had successfully reduced greenhouse gas emissions and improved fuel efficiency for the last decade.

The replacement is the risibly named Safer Affordable Fuel Efficient Vehicles Rule, or SAFE. The government's own models predict that SAFE will increase greenhouse gas emissions by about 1.5 billion metric tons through 2040, and cost consumers $244 billion more for gasoline. It's also likely to increase traffic deaths as it adds to the assault on our climate.

But if the threat of climate change, which is likely to be far more deadly than the current virus, seems too far removed to worry about, worry about this: the President's approval ratings have never been higher.

Sure, Gallup reports that it only stands at 49%, but the increase has been driven by Independent voters, who generally swing every election. With Trump's discovery that empathy sells, and with Biden gasping for airtime, and dialing for dimes to replenish his meager campaign fund, who's to say that the Orange Carnival Barking Clown—miss you, Mike Bloomberg—won't finally breach the 50% barrier and threaten to take the popular vote as well as the electoral college?

So stay healthy, hunker down, and don't lose sight of the fact that there'll be plenty more to worry about—and do something about—once we defeat this current scourge.