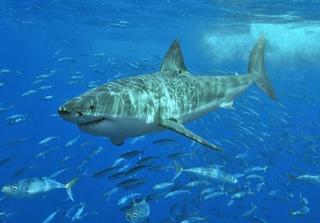 Here's lookin' at you, Mr. President!

For anyone who remains unconvinced about climate change after seeing the horrific destruction in the Florida panhandle levied by Michael, the most powerful hurricane ever to hit the US mainland, or the ominous new report from the United Nations’ Intergovernmental Panel on Climate Change describing a world of worsening food shortages and wildfires as soon as 2040, there’s always the threat of our old friend, “Jaws.”

A few weeks ago, a 26-year-old boogie boarder was killed by a shark in the first fatal attack in Cape Cod in 80 years (Spielberg took some liberties with the truth in “Jaws” the movie, released in 1975) and a 13-year old was mauled while diving for lobsters in California. No, sharks haven’t become more pugnacious. They’re simply following the food chain north, as global warming increases the temperature of the oceans.

For those of you who didn’t hang on every word from Stormy Daniels these past few months, one of her most interesting revelations is that her onetime paramour is a confirmed sharkaphobe. She’s been quoted as saying that President Trump is “obsessed with sharks. Terrified of sharks. He was like, ‘I donate to all these charities and I would never donate to any charity that helps sharks. I hope all the sharks die.’” So in light of his fears, perhaps it’s no coincidence that our dear leader is walking back his disbelief about climate change, at least a little bit.

When Lesley Stahl asked President Trump on “60 Minutes” if he still thought climate change was a hoax, he said:

If I am deciphering his statement correctly, Trump does acknowledge that the climate is changing, but not that human activity has anything to do with it, and besides, he is confident that the warming trend will reverse itself. Bottom line, it’s all about money and jobs.

If he were better informed, he might have said that warming oceans can be job creators, too. Warmer ocean temperatures have provided a temporary boom to lobster fisherman in Maine, where the Gulf has warmed faster than 99 percent of the world’s oceans. Of course, the lobster haul dropped almost 20 percent last year, and lobster prices are lower than they were twenty years ago, so now the fishermen are wondering how soon they’ll need to pull up anchor and sail north to Canada. So much for those jobs.

But there’s always Silicon Valley. Shark attacks have opened up a whole new field of interest for high tech. Several start-ups in Australia are testing artificial intelligence, drones, and electric force fields to prevent sharks from attacking humans. It’s surely only a matter of time before Boston Dynamics develops a robotic and more durable version of Quint, the professional shark hunter in “Jaws” who met such an untimely end at the hands (sic!) of the title character.

At any rate, Mr. President, you should know that even considering only the people who go to beaches, Wikipedia reports the chance of being a victim of a shark attack in the USA is 1 in 11.5 million, and the chance of being killed is less than 1 in 264 million. What do you think the chances are that the findings of the UN’s Panel on Climate Change are correct and that we’re the cause of it?


If you like these blog posts, why not suggest to your friends that they sign up? Just forward this email and they can do so by clicking here.