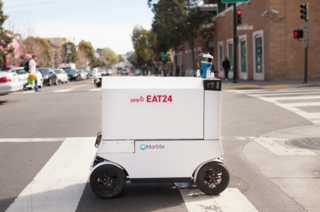 Better than a minimum wage worker on a bicycle?

Jobs and robots have been making news recently, but in unexpected ways.

Economists and business leaders are finally realizing that the tax bill that President Trump and the Republican congress is trying to ram through as a Christmas present to corporations and the 1 percent, will create more jobs all right—for robots! A provision in the bill provides for a full and immediate write-off of capital expenditures in the first year, rather than the current law that mandates that assets be depreciated over time.

News flash for the 99 percent: robots are “capital expenditures,” human beings are not.

Daron Acemoglu, an economist at MIT, notes in an interview with NPR that there are no provisions for hiring and training incentives for workers in the tax bill. And although current laws favor capital investment, the new regulations are even more favorable, so if a business buys the machine, they’ll get “a huge handout from the government.”

The New York Times is certainly worried about the problem—sort of. The newspaper recently ran an article that was headlined, “Robot-Proofing Your Child’s Future, Machines may soon make half of today’s jobs obsolete.” That kind of news is certainly worthy of the front page, right? Wrong. It was the feature story in the Thursday Styles section, competing with a picture of Naomi Campbell wearing Versace, accompanying an article about how “the term ‘supermodel’ could use an alteration.”

Finally, all is not lost. Human beings are fighting back. Who knew that in San Francisco, “delivery robots” were already clogging the city’s sidewalks to the point where the city government had to pass legislation to strictly control their number? The shopping-cart sized “autonomous vehicles,” owned by a Yelp subsidiary, deliver food in the Mission and Potrero Hill neighborhoods to nearby customers. “Not every innovation is all that great for society,” said San Francisco supervisor Norman Yee, who wrote the legislation. “If we don’t value our society, if we don’t value getting the chance to go the store without being run over by a robot… what is happening?”

Moreover, San Francisco residents (a term used loosely) are taking matters in their own hands. Taking the lead from the delivery robots, the San Francisco SPCA (yes, the animal lovers) deployed “security robots” to keep homeless people from congregating outside their offices. “We weren’t able to use the sidewalks at all when there’s needles and tents and bikes, so from a walking standpoint I find the robot much easier to navigate than an encampment,” the SPCA president was quoted as saying. K9, as the robot was dubbed, was later found knocked over, covered with a tarp, and with barbecue sauce smeared all over its sensors.

It’s good to know that human beings are not taking the future lying down!