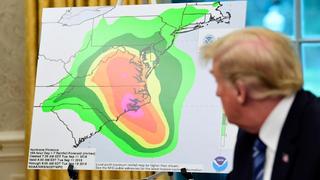 Are hurricanes stronger and more frequent because of climate change?

That seems like the pertinent question after watching now-Tropical Depression Florence slow walk over the Carolinas, bringing record storm surges, rainfall, and river flooding. The answer is an unambiguous Yes according to the New York Times, which has put a dedicated team of expert reporters on the climate change desk.

The data is indisputable. So is the physics. The planet is warming dramatically. Increased water temperatures create more favorable conditions for hurricanes, which only form when the ocean is 79 degrees Fahrenheit or above. Increased air temperatures hold more moisture, which translates into more rain, a primary agent of storm destruction. The warming climate also seems to be making hurricanes stall and linger longer over one place.

The answer becomes even more pertinent in light of recent developments on the climate change front. The Times is also reporting that the Environmental Protection Agency (sic!) is about to roll back Obama-era regulations that limited the amount of methane, a powerful greenhouse gas, that oil and gas drillers were permitted to release into the atmosphere. That revision will come on the heels of two other regulatory rollbacks that allow greater carbon dioxide emissions from automobiles as well as from coal-fired power plants.

It’s no secret that Trump’s termites at the E.P.A. are willfully ignoring the warning of Antonio Guterres, the United Nations secretary general, that the world is approaching a tipping point, that climate change is “the defining issue of our time.” The secretary general told global leaders earlier this week that, “If we do not change course by 2020, we risk missing the point where we can avoid runaway climate change.”

It’s also no secret that President Trump, no friend of data, is willing to politicize anything and everything, even natural disasters such as Florence. This morning, he twittered, “Right now, everybody is saying what a great job we are doing with Hurricane Florence – and they are 100% correct. But don’t be fooled, at some point in the near future the Democrats will start ranting ...that FEMA, our Military, and our First Responders, who are all unbelievable, are a disaster and not doing a good job. This will be a total lie, but that’s what they do, and everybody knows it!”

Let’s hope he’s right about the FEMA response. If not, the Democrats have a duty to the nation, not to politics, to set the record straight.

In either case, it’s clear that the leader of the free world is still smarting from the reported death toll of Hurricane Maria in Puerto Rico, despite his efforts to rush paper towels to the survivors. Therefore, he may be more circumspect about what he says in the coming days about Florence. But it’s unlikely that he will link the extensive loss of life and property to worsening hurricanes brought on by the “climate change hoax.” The only way I see that happening is if Mother Nature decides to pay a personal call on Mar-a-Lago.