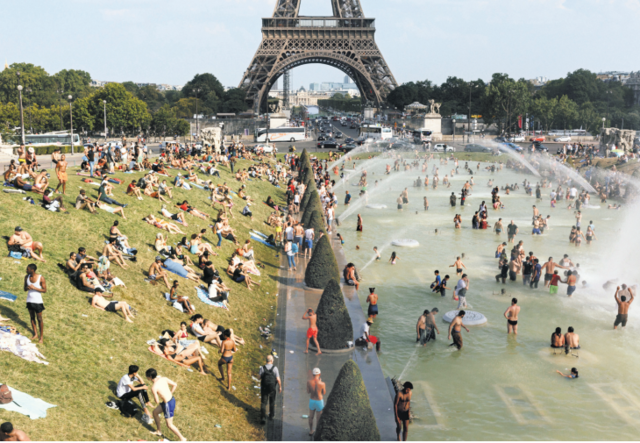 This is not a joke about Notre Dame or the rage of Adolph Hitler in the dying days of the Second World War. In case you missed it, the temperature in Paris neared 110 degrees yesterday, the highest in recorded history. And Paris was five degrees cooler than Gallargues-le-Montueux in the south of France, where the temperature reached 115 degrees, the hottest ever in the country. Similar scorching temperatures were recorded in Belgium, Germany, and the Netherlands during the current European heat wave. Residential air-conditioning is generally below 5 percent throughout the region.

And there's worse to come. According to a new study, by 2050, the average high daily temperature in the warmest month in Madrid will be 101, the capital city of Slovenia, 97, and London, a balmy 85. Delhi will set the record at 110 while the USA get off lightly, New York at 93 and rainy Seattle at 88. To be very clear, those are the high temperatures every day averaged over 30 or 31 days.

The World Meteorological Organization claims, "It is premature to attribute the heat wave to climate change, but this is consistent with climate scenarios which predict more frequent, drawn out and intense heat events as greenhouse gas concentrations lead to a rise in global temperatures."

Does anybody else see a walking, talking duck? And I don't mean Aflac.