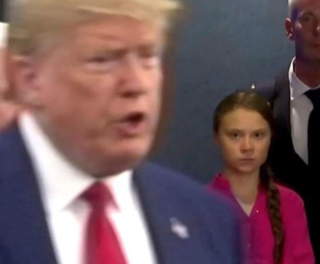 The same week that the United Nation's Intergovernmental Panel on Climate Change sounded the alarm that the world's oceans are in grave danger, the Trumposphere was still fulminating about the speech delivered by 16-year-old Greta Thunberg at the UN's Climate Action Summit, denouncing the business-as-usual attitude of most politicians and business leaders.

The whimsically named Liberty Nation website thundered that Greta is the poster child for the way climate hysteria is damaging children, who should "sleep soundly… there are no climate monsters under the bed." To bolster its position that there is no scientific basis for climate change, the website cites two incidences of snowfall in the Sahara desert in recent years, and the modest increase in the population of polar bears in the Arctic (after stringent protective measures were put in place to preserve the species, but let's not mention that.) And lest we worry further, should climate change "turn out to be a problem, Bill Gates and others have invested in technologies that could render the whole world carbon neutral overnight, either with nuclear power or carbon capture." Go Bill!

Another Trumpohone, zero hedge.com, goes so far as to imply that Greta is nothing but a copycat. They correctly point out that in 1992, another young girl, Severn Cullis-Suzuki, then the 12-year-old daughter of a Canadian environmentalist, addressed the UN Earth Summit in Rio de Janeiro. In her speech, she described being "afraid to breathe the air" and warned of mass extinctions. And look how well that turned out!

Author's Note: Severn is still a prominent environmental speaker and activist and vocal supporter of Greta.

And for good measure, Fox News's Laura Ingraham noted the resemblance of Greta with one of the youthful residents in a Stephen King movie, "Children of the Corn," cultists who murder anyone over the age of 18.

Moving on, for those of you who might be alarmed at the Panel's warnings about the impact of climate change on our oceans, here a couple of choice findings that you don't—or do—have to worry about…

…the frequency of marine heat waves has doubled since the 1980s, devastating commercial fishing e.g. cod catches in the Gulf of Alaska had to be reduced 80 percent to rebuild the fishery after the latest heat wave

…pathogens are proliferating in warmer water, including bacteria that already sicken 80,000 Americans each year who eat raw or undercooked shellfish and other seafood.

Just saying, the hundreds of scientists who contributed to the report might be on to something. Sushi anyone?