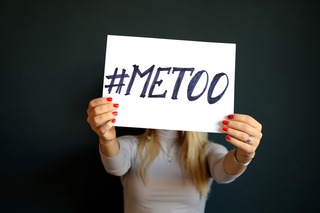 The following is a guest post from Audrey Insoft, author of Divine Fate, the true story of a Vietnam War veteran who confronts his demons by saving abandoned and forgotten children in the country that haunts his past. She is also the leader of a group of Westchester County, NY, writers who meet periodically to discuss and review their work.
—
Posting “Me Too” on my Facebook page is not a badge of honor nor is it something I would have ever chosen to do. But yes I posted it, because it’s the truth and women (and men) should have the right to speak out about harassment, sexual assault and the constant barrage of inappropriate behavior and conduct that has permeated our society.

Recently I was talking to friend of mine at a church coffee hour. I don’t even remember how the subject of “Me Too” came up, but she noted that “every single woman in this room could probably tell her story of sexual harassment, sexual assault or any variety of improper conduct.” Sadly, I had to agree.

When I was barely 13 my father had just died and I was an introverted, sad, and vulnerable teenager. Unfortunately for me, one of my male teachers saw this and decided to exploit the situation. He coaxed me to his classroom early in the morning, before classes, where he “seduced me” with poetry. To this day, I don’t know if he wrote the poetry or plagiarized it. He once asked me to come to his apartment, which I declined. But he was always there, lurking in the background, trying to be “my friend.” He even contacted me and asked if he could come meet me in the woods behind my home. My family farm had over 300 acres, so the “woods” were pretty vast and I’m sure his plan was to meet me far away from anyone’s eyes and assault me. Fortunately, I told my mother who took control and contacted the school. Ultimately the teacher was fired, but a female colleague claimed I had made up the story. This is now referred to as “victim shaming” and for years I felt guilty about the whole scenario. Recently I learned that he had assaulted a child in another school.

Fast-forward several years. I’m now a college graduate and a young professional, working at a major insurance company in Connecticut. My job entailed traveling for extended periods of time. During one of my travels, I was in Colorado working with a female colleague, training a whole new department of staff people. She and I lived in a hotel for over three months and could only return to Connecticut once or twice during that period. So we did everything together and even received our bi-weekly paychecks from the head of the regional office on Friday afternoons. Early on, he decided that the only way we would receive our paycheck was if we “went out with him.” He took us to a club where he insisted that we drink and dance with him in order to receive our paycheck. He was old, short and fat and my colleague was tall, leggy and bosomy. He danced with her first and basically put his face into her chest, rubbing it in for good measure, while trying to grind his crotch into hers. Then it was my turn. It was a demoralizing experience in extortion and sexual advances that was totally inappropriate.

After this encounter, my colleague and I talked about what we should do but decided that (1) we needed our paychecks and (2) no one would believe us since we were low on the totem pole and (3) this was a high ranking insurance executive. So yes, we were victims who never spoke out and endured this bi-weekly routine until our job was finished in that geographical area, although eventually he tired of us and moved on to other targets. I totally understand why victims do not speak out, since I was one of them.

Sadly this tale does not end there. Over the years I’ve experienced more than my share of inappropriate behavior at the hands of men who had more power than I did at the time. This has included having my ass pinched at work, being the subject of sexual innuendo and inappropriate comments, and unwanted physical contact, some of which I still find difficult to talk about.

It’s not surprising given where we are as a society. We have an Assaulter-in-Chief. We have a pedophile who ran for the senate who was lauded by half of the GOP and celebrities being called out by the day. Where does it end? What ever happened to morals, self-control, decency and laws?

Thankfully, the floodgates have opened and #MeToo is being heard. Our stories need to be told, however old, however painful, however personally embarrassing they seem to be. We were, after all, victims.