Trump is the New Groucho 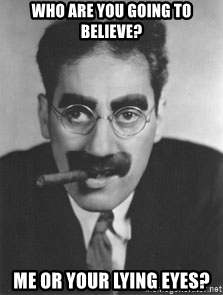 No, it's not his permanent scowl that earns him that comparison. It's his unpresidential gall.

On the same day that the New York Times reports that "11 Straight Days of Tornadoes Have U.S. Approaching Uncharted Territory," the newspaper's lead story is headlined, "In Climate Fight, Trump Will Put Science on Trial."

No one has ever confused the Midwest with Tornado Alley in Oklahoma, but that might soon change. The latest bout of storms cut a swath of death and destruction from Iowa to Ohio, with stops in Illinois and Indiana. Memorial Day marked the eleventh straight day with eight or more tornados according to the National Weather Storm Prediction Center.

Ask yourself? When is the last time you turned on the TV or picked up a newspaper or checked yours news feed and NOT found a story about yet one more destructive weather event? Does it make you think something might be up with the climate?

Not according to President Trump. After rolling back numerous climate regulations, pulling out of the Paris accords, Twitterly mocking climate change, and appointing a Secretary of State who believes that the warming of the Arctic makes it a land of "opportunity and abundance," he's preparing to take off the gloves and attack the underlying science. Key to his anti-climate change initiative is a proposed, new climate review panel that will challenge, and hopefully undercut, years of climate change research.

The panel proposal, backed by the president's national security advisor, John Bolton, will be headed up by William Happer, a 79-year-old former Princeton University physics professor, who despite his seemingly impeccable credentials, is on record as saying, "The demonization of carbon dioxide is just like the demonization of the poor Jews under Hitler."

Tastelessness aside, who are you gonna believe, him and the other Trump stooges or your lying eyes?