Listening to the Tomatoes 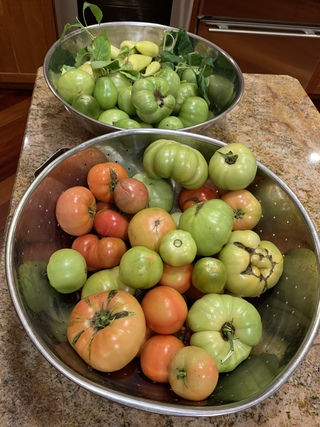 I come from generations of farmers on both sides of my family. So as soon as I bought a house outside New York City, it was natural for me to begin tending a vegetable garden. For years I could count on a killing frost here in northern Westchester County no later than the first week of October. Last year, it arrived on October 29. This year it was November 1. We gathered in the last of the tomatoes to ripen indoors on Halloween day.

So how to explain that when I woke up yesterday morning, less than two weeks later, the temperature was 17 degrees? And by midday, it was only up to a balmy 28? And my lettuce and chard is hanging on for dear life, despite being covered by thick sheets of plastic?

Because it's climate change.

The polar vortex has made an early appearance this year, and two-thirds of the nation is in its icy grip. While wildfires are still burning in California, the coldest temperatures ever recorded in November have been reported in Louisiana, Mississippi, Virginia, Illinois, Indiana and Michigan. Snow is on the ground in 49 of the 50 states, including the peaks of the volcanoes in Hawaii. Florida has no snow, but it does have wind chill temperatures as low as 20 degrees.

Short-term weather should never be confused with long-term climate. But these extreme cold snaps have become more frequent and severe in recent years. So have heat waves, torrential rains, and destructive tornadoes and hurricanes. And so have knock-on effects like devastating floods, the aforementioned wildfires, and longer and longer growing seasons in my vegetable garden.

Scientists have been loath to link a "weird weather" event like the current cold snap to a changing climate. But even that is gradually changing. As a backyard farmer, and a commonsense layman, the link seems indisputable. I listen to the tomatoes.