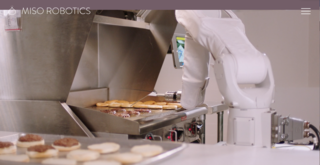 “Robots Will Transform Fast Food” reads the headline in the online edition of The Atlantic, and “That might not be a bad thing.”

The Atlantic article goes on to describe how Japan—where else?—is already ahead of the curve, with a fully functioning okonomiyaki restaurant that makes a gin and tonic to serve along with the cabbage-and-meat-topped pancakes. Here in the US we’re still in the development and test phase, with “Sally,” a boxy robot from Chowbotics that assembles salads ordered on a touch screen, and “Flippy”—the inspiration for the McRobots in The Piketty Problem—who’s turning out 150 burgers an hour for CaliBurger out in—where else?—California. You can take a look at Flippy in action right here!

The CEO of the CaliBurger chain is predictably upbeat about the prospect that the robots are coming, the robots are coming. He’s quoted as saying that employees don’t like manning the hot, greasy grill, so now they’ll be free to interact with customers, like bringing extra napkins to a customer’s table and asking them if they’re enjoying the burger. (He didn’t mention whether he had a bridge to sell, as well.) His counterpart in Japan is less starry-eyed. “It takes about a year or two to get your money back,” he said, “but since you can work them 24 hours a day, and they don’t vacation, eventually it’s more cost-efficient to use the robot.”

As for customers, particularly millennials, the sense is that lack of human interaction is actually an advantage, not a drawback. Eatsa, an automated start-up restaurant in San Francisco which is described as “an Automat for the app age,” stationed two greeters alongside the pick-up station to welcome and help customers. That soon turned out to be twice as many as needed, and when the CFO looks at the numbers, it might be two too many. Especially with the new Republican tax plan that allows full deductibility for capital expenses in Year One, rather than amortizing the cost over time.

Of course, some economists are going out of their way to defend the proposition that robots will not take away human jobs. The example cited most often is that of bank tellers, whose numbers actually grew between 1990 and 2010, at the same time that the number of ATMs increased 500 percent. What is less frequently mentioned is that the number of tellers per branch decreased substantially, and the increase was entirely due to the banks opening more branches.

Net, net, if you think America needs more fast-food restaurants, there’s no worry. As for me, if my position isn’t already clear, may I recommend that you read The Piketty Problem, if you haven’t already! But regardless of their impact, it’s clear that robots will be an economic force to contend with—sooner, not later. They are coming.

Happy New Year to all! And may you always have a job (or an avocation) that requires the human touch!