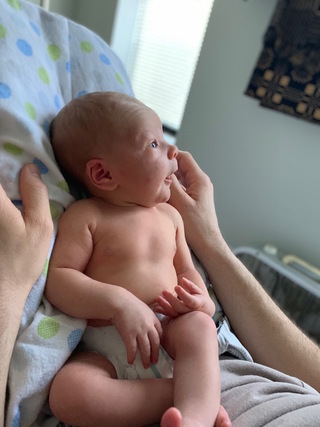 To paraphrase the common corruption of Dr. Johnson's most famous sound bite, the prospect of a new grandson, Karl Red Gonzalez, my third, concentrates the mind wonderfully.  What kind of America—what kind of planet?—will the three of them have to cope with when they grow up?

There are no hard and fast answers, of course, but despite the current repugnant politics in Washington and the horrendous social and economic imbalances that are the legacy of the so-called free market, I am optimistic. The generation just waking up to a concern about their future, the 25 to 49 demographic, is much more open to the kind of radical thinking that we'll need to de-ossify our political system and restore the concept of the American dream. With a little help from their elders (e.g. Bernie and Liz and maybe even Joe, plus Ed Markey, who's not even running for president, yet), change and progress seem achievable, starting now and building every year.

Nowhere is that radical thinking more visible than the proposal put forward by far-left Democrats to combat climate change—the Green New Deal. And nothing has been embraced more quickly and vilified more vociferously by so many so quickly, so there's a good chance of real gain or pain and probably both if it were to become policy.

My reading of the Green New Deal is that it was released prematurely and amateurishly, and larded with ultra-liberal, a.k.a. socialist, pork barrel goodies that have nothing to do with the main issue—impending, catastrophic climate change. I think that, in its present form, the proposal is idealistic and impractical, not an unusual combination, and that it's likely to be suffocated by pious lip service from progressives and finished off by vicious attacks from the right who can't spell socialism much less define it.

Notwithstanding those reservations, I believe it's the best thing to come along in politics within memory—a long awaited cri de coeur for our country and our planet. It may not be the best roadmap to get us where we need to be, but it sure as hell nails the destination. And as long as we can keep the argument going, and focus and elevate the level of national discourse about the biggest threat the planet has ever faced, it's the first step towards a better world for my grandchildren.

In other words, the beauty and the strength of the Green New Deal lies in its ability to get everyone boiling-over angry and paying attention. The only thing better would be if the sponsors had the power to declare climate change a true national emergency.

New York Times columnist Bret Stephens, no friend to radical climate change solutions, rightly criticizes activists who have been "claiming both (his italics) that climate change is a World War III-level challenge, and that we can deal with it relatively easily…do your part and bike to work!" He then goes on to highlight its strength, "the Green New Deal blows the lid off that delusion. It is a remarkably honest attempt to offer a massive answer to what its authors see as an epochal problem."

And its impact is already being felt. I don't think it was a coincidence that shortly after the release of the Green New Deal, the Sunday NY Times ran a multi-page special section about climate change, headlined "Time to Panic?" Or that Ohio governor, John Kasich, who has his eye on challenging Trump for the 2020 Republican nomination, gave a major speech today urging the GOP to stop denying climate change and start putting forth policies to address it.

That's what my grandchildren need right now, books and articles and speeches and proposals that make people start to ask if climate change really is a WWIII challenge and not simply a political talking point.  And after listening and debating with the scientists and with each other, let them agree or disagree. But at least they would be engaged with the problem, and with a little luck, like the prospect of hanging, it just might "concentrate the mind wonderfully." Then, and only then, action will follow.