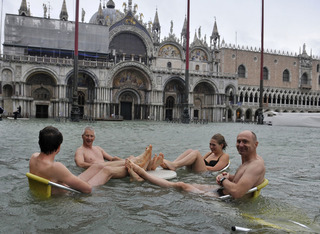 Why are they smiling?

Do you need to ask? Venice, "La Serenissima", is no longer so serene. In fact, between the increased frequency of the aqua alta or extreme high tide, the hordes of smiling, carefree tourists who descend on the city every day, and the prospect of rising sea levels brought on by climate change, the city is in a state of crisis, currently and permanently.

The city is built on hundreds of thousands of wooden pilings that connect and shore up more than 100 small islands that dot the Venetian lagoon in the Adriatic Sea. The roughly quarter million residents are vastly outnumbered by thirty million annual visitors, many who arrive on hundreds of giant cruise ships, some of which tie up only yards away from the Doge's Palace. Every day, they add about 16 million pounds of "live weight" that batters the streets in a city that needs no additional help in slowly subsiding into the sea.

As Venice sinks, the waters rise. The aqua alta now strikes the city with increased frequency—from 10 to 60 times a year—and increased severity—as much as six feet above normal. The future is even bleaker, and not just for Venice. According to a recent study published in the journal Nature Communications, rising sea levels could impact three times as many people by 2050 as previously thought, and all but drown some of the world's great coastal cities. Bangkok, Mumbai, Shanghai, and Alexandria can now be added to the list of usual suspects, such as Miami, New York, and Boston.

The knock-on effects will be horrendous, principally on population migration patterns. If people and politicians in Europe or America think they have a problem now, imagine what it might be when tens of millions of people are literally left homeless?

Serious fiction usually tiptoes around the problem of climate change, but Gun Island, a new novel by literary award-winning writer Amitav Ghosh, confronts the migration issue head on. It's the story of displaced people, some of them literally from India and Bangladesh, and one of them more philosophically and temperamentally from Brooklyn. Ironically, the colorful cast of characters all end up in Venice, where so many Bangladeshis work the menial jobs. There, they bear witness to the aqua alta and the appalling cost to humanity of a changing climate.

If you read Gun Island, I guarantee it will make you think.