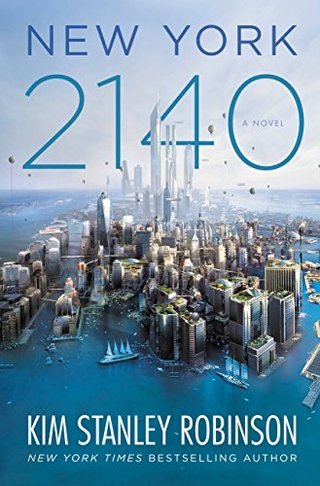 Kim Stanley Robinson’s latest novel, New York 2140, (Orbit, Hachette Book Group, March 2017) presents a grim vision of the impact of a warming global climate. I’m sure Robinson could have easily conjured up a world like that in the lauded, 2016 movie Interstellar, where America’s farmland is sufficiently fried to create a new Dust Bowl and the only solution for humanity is to use gravitational propulsion to escape to a distant galaxy through a recently detected wormhole near Saturn. But instead, a writer who ironically is best known for his own space-escape yarns such as The Mars Trilogy, has set himself a more difficult challenge. Robinson visualizes a world where mankind can’t avail itself of improbable technological advances or convenient astronomical discoveries, and instead must struggle to adapt to a barely recognizable planet.

The first and second “pulses,” sudden and violent surges of water from melting ice, have already flooded the low-lying land and the great coastal cities. New York, or more correctly Manhattan, has survived by reinventing itself as a modern-day Venice, with canals and skybridges and bacinos connecting the old skyscrapers, now protected from rust and corrosion by a diamond film coating (OK, somewhat improbable, but easier to accept than warp-speed rocket ships and wormholes in space.)

The cityscape may have been immutably altered, the mayor (and the President) may be female, and muskrats may now outnumber sewer rats, but New Yorkers are much the same. Police deal with the criminals, petty and otherwise, social workers tend to the homeless and the dispossessed, and the latest iteration of greedy bankers and hedge fund managers speculate on the trend of real estate prices in the intertidal zone. As always, living space comes at a premium so the 1 percent live in soaring new towers built on higher ground, those in the middle make do with crowded, communal coops in older apartment buildings and converted offices, while the fringe elements do their best to survive in rickety, water-logged walk-ups. And for tenderhearted animal lovers, the Assisted Migration blimp is always airborne, its perils-of-Pauline hostess continually broadcasting to a rapt audience as she does her shtick while transporting endangered species to safe environments from threatened ones (e.g. a half-dozen ferocious but cuddly polar bears to Antarctica.) All is well until Hurricane Fyodor bears down on the city, threatening to envelop it in turmoil and destruction worthy of Dostoyevsky himself. And then all is well again, in love and anti-capitalist politics if not in climate.

Robinson’s conception of New York a little more than a century hence is powerful, and he deserves kudos. I just wish I loved the book unreservedly. Unfortunately, the characters tend to be flimsy, the prose is often turgid, and the plot is difficult to decipher. But I accept its flaws for its triumphs. It is what fiction should be at its best—a willful act of imagination. It is also a stern warning for those of us around today. The year in the title shouldn’t lull us into a false sense of security. All the “bad stuff," like the apocalyptic pulses, happens between now and 2140, during the lives of our children and grandchildren, if not our own lives.

For that reason alone, Robinson’s novel is arguably not science fiction but a powerful social protest novel in disguise. It certainly does what a social protest novel is meant to do, dramatizing the effect of a prevailing social problem—climate change—on its characters, and thereby attuning readers to the depth of the problem, and motivating them to do something about it. It doesn’t matter that the social problem is speculative and its effects are in the future. The speculation is based on scientific fact. Moreover, the social problem for potential readers is not speculative. We’re too complacent about what the planet might look and feel like in the not so distant future if we don’t begin to take radical measures now.

Case in point is how the New York Times dispatched the novel with a brief, multiple-title write-up in the Sunday Book Review. New York 2140 was lumped in with Volume 7 of the continuing saga of two warring, galaxy-spanning civilizations, an anthology of djinn-themed short fiction, and a police procedural about the hunt for a mass murderer potentially related to the appearance of a grotesque and deadly extraterrestrial fungus. When the reviewer finally got around to Robinson’s novel, she snarkily observed that “in an age when local real estate agents already toss around terms like ‘Anthropocene’ and ‘flood zone' over brunch, its audacious futurism arrives feeling a bit obsolete.”

Actually, in these perilous times for our country and our planet, what feels passé to me is the attitude that prevails in the lit biz. Why do they continue to overlook—or is it deny?—that fiction, like art of any kind, can be and should be a powerful engine for social change?